Skip to content
Homepage / iPhone / When to Expect the Emergency SOS via Satellite Feature to Launch on iPhone
Post Views: 19

All four iPhone 14 models support a new Emergency SOS via Satellite feature that will allow the devices to connect directly to a satellite, enabling users to send text messages to emergency services when outside the range of cellular and Wi-Fi coverage. Apple says the feature will launch in November, and while the company has yet to provide a more specific release date, we have outlined the most likely timing below. 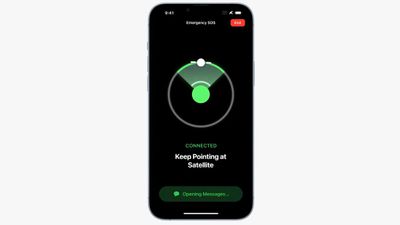 In a support document, Apple says Emergency SOS via Satellite “will be available with an iOS 16 software update coming in November 2022.” Given that iOS 16.1 was released in late October, and that iOS 16.2 is expected to be released in December, Emergency SOS via Satellite will likely be enabled with iOS 16.1.1, which is already in testing and should also address issues related to Wi-Fi connectivity and the SKAdNetwork framework.

When it launches in the United States and Canada, Apple says Emergency SOS via Satellite will be free for the first two years, which suggests that Apple might be planning to charge for the service at some point in the future. Apple reportedly confirmed that the feature will be expanded to additional countries by the end of next year.

In “ideal conditions with a direct view of the sky and the horizon,” Apple says a text message might take 15 seconds to send via satellite, but notes it can take over a minute for a message to send “under trees with light or medium foliage.” Read our in-depth guide to Emergency SOS via Satellite for additional information about the feature.

Apple’s apparent final hardware launch of 2022 is here with the latest Apple TV 4K, as it seems we won’t be seeing any Mac updates until early next year. There’s still a bit more on the calendar before the end of the year, however, including the holiday shopping season and software updates such as iOS 16.2 that will bring a number of new features and improvements when they are released in…