A new video has revealed our first look inside the iPhone 14 Pro Max, showing an L-shaped battery, updated placements of display components, larger cameras, and more, just days ahead of when new iPhone 14 models are expected to begin arriving to customers. 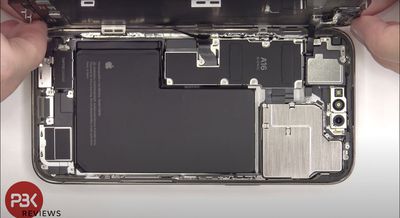 The early teardown was done by PBKreviews and shows an internal design that looks similar to last year’s iPhone 13 Pro Max but with a few changes. Like last year, the battery in this year’s ‌iPhone 14 Pro‌ Max is L-shaped, and as MacRumors previously reported, the battery is slightly smaller than last year. 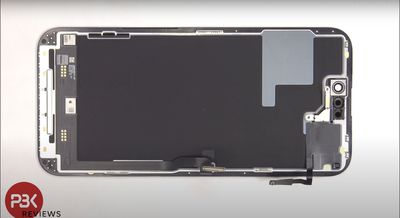 According to Apple, it has made internal design updates to all models of the ‌iPhone 14‌ and ‌iPhone 14 Pro‌ to better manage heat. While this teardown doesn’t allude directly to what those changes are, there is a metal plate that covers the main motherboard that may have been better optimized to dissipate heat. A graphite film on the back of the display also helps with heat, as shown in today’s teardown. 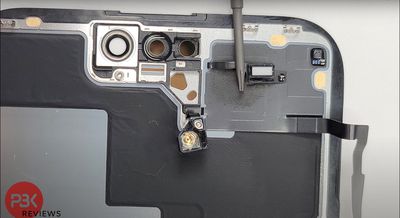 The teardown also gives us a closer look at the updated notch replacement, consisting of hole-punch and pill-shaped cutouts digitally merged within iOS to create the Dynamic Island. For the first time on iPhone, Apple has placed the proximity sensor under the display to free up space in the TrueDepth camera system and eliminate the notch in favor of the digitally created pill-shaped cutout.

On previous iPhones, the proximity sensor, which detects when the phone is flat on a table, in your pocket, or being held during a phone call, was housed in the notch alongside components for Face ID.

The teardown also shows the updated rear cameras, a closer look at the earpiece, and more. A more detailed teardown of all models of the ‌iPhone 14‌ and ‌iPhone 14 Pro‌ are expected to be completed by iFixit soon after the devices begin arriving to customers. iFixit‘s teardown will offer a more comprehensive understanding of what has changed internally on the latest iPhones.