One of the new features in iOS 16 is Rapid Security Response, which lets Apple push out important security fixes to users without requiring a full iOS update. For users running the iOS 16.2 beta, Apple today released one of those updates to deliver unspecified bug fixes affecting the software. 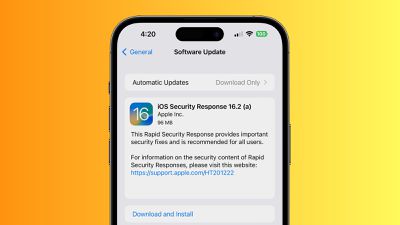 iOS Security Response 16.2 (a) arrives via the standard Software Update mechanism in the Settings app, but is a relatively quick update, requiring just a couple of minutes to download and prepare the update and then a quick restart and install process.

After the update has been installed, the system will report an updated version of iOS 16.2 (a), and tapping on the version in the About section of Settings will display information about your installed iOS version and the Rapid Security Response update, with the ability to remove the security update if desired.