Apple’s $550 over-ear AirPods Max headphones are less effective at blocking out outside noise when using Active Noise Cancellation (ANC) following their latest firmware update, according to results from a detailed audio test. 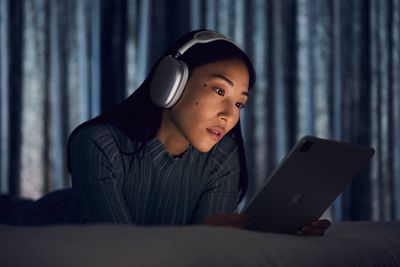 A recent update to testing by RTings.com reveals that the ‌AirPods Max‌ ANC “blocks out a bit less noise between the mid-bass to high-bass range” after the 4E71 firmware update, which was released in May. “When it comes to the mid and treble ranges, this firmware update has slightly changed the level of isolation, but it’s a relatively minor difference,” RTings.com said following its test.

The decrease in ANC effectiveness was highlighted in an article by The Verge last month following months of discussion and complaints from ‌AirPods Max‌ users on Reddit and other discussion forums.

It’s unclear why Apple adjusted the ANC performance in the latest update or if it plans to restore ANC effectiveness in a future update. Apple occasionally updates the firmware on ‌AirPods Max‌ and other AirPods models to deploy new features, fix bugs, and tweak performance.

Apple has been providing developers with beta versions of AirPods firmware since WWDC earlier this year, with the most recent beta version having been released earlier this month, but there’s no word on whether there are any changes to ANC performance in the update.

Apple Releases New Firmware for AirPods Pro 2 Ahead of Launch

Apple today released new firmware designed for the second-generation AirPods Pro, which means the new AirPods will have a day one firmware update available at launch. The 5A377 firmware is now available for new AirPods Pro owners, up from the 5A374 firmware they ship with. Apple has not provided information on what’s included in refreshed firmware updates for the AirPods‌, so we don’t…

Apple plans to begin listing new features and changes in AirPods firmware updates in a forthcoming support document on its website. In the fifth developer beta of iOS 16, navigating to Settings → General → About → AirPods and tapping on Firmware Version leads to a new page indicating that AirPods firmware details are available at support.apple.com, complete with a link to a support…

Following the Worldwide Developers Conference keynote in June, Apple provided developers with a beta firmware for several AirPods models, including the second-generation AirPods, third-generation AirPods, AirPods Pro, and AirPods Max. Apple today updated that firmware, with the version number going from 5A5282d to 5A304a. The updated AirPods firmware is limited to developers, who can…

Apple’s AirPods Max over-ear headphones have returned to their lowest-ever price on Amazon, priced at $429.00, down from $549.00. In a rare occurrence, we’re tracking every single color of the AirPods Max at this price, and all are in stock and ready to ship out today. Note: MacRumors is an affiliate partner with Amazon. When you click a link and make a purchase, we may receive a small…