Skip to content
Homepage / iPhone / These 10 U.S. States Will Let You Add Your Driver's License to Your iPhone: Here's What to Know
Post Views: 43


Earlier this year, Apple launched a feature allowing residents of participating U.S. states to add their driver’s license or state ID to the Wallet app on the iPhone and Apple Watch, providing a convenient and contactless way to display proof of identity or age.

As we wait for IDs in the Wallet app to expand to additional U.S. states, here is everything you need to know about how the feature works.

Which U.S. states support the feature so far?

Which U.S. states are committed to supporting the feature?

In March, Apple said the additional 10 states listed below would “soon” allow residents to add their driver’s license or state ID to the Wallet app, but it’s unclear exactly when each state plans to roll out support for the feature.

Apple said the feature will also be supported in Puerto Rico.

Last year, Apple executive Jennifer Bailey said the company was “already in discussions with many more states” and working to offer the feature nationwide in the future. Apple has yet to announce any plans to expand the feature to other countries.

Note that some states like Florida and Louisiana offer iPhone driver’s licenses through their own state-operated apps, separate from this Wallet app feature.

Where can IDs in the Wallet app be used? 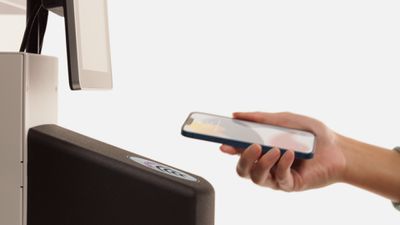 Driver’s licenses and state ID cards stored in the Wallet app can currently be used at select TSA checkpoints within three U.S. airports:

Apple says travelers should refer to TSA checkpoint signage to confirm availability of the feature.

Starting with iOS 16, you are able to present ID cards stored in the Wallet app in supported iPhone apps that require identity or age verification. Apple showed Uber Eats and Turo as two examples of apps that could offer this functionality.

Apple’s website previously said IDs in the Wallet app would also be available for use at select retailers and venues in the future.

The feature does not replace a physical ID in all situations yet. For example, Apple makes no mention of IDs in the Wallet app being accepted by law enforcement or the government, so carrying a physical ID is still a necessity for now.

Which iPhone and Apple Watch models are supported?

For security purposes, Face ID or Touch ID must be enabled on the iPhone, and the device’s region must be set to the United States. An Apple ID account with two-factor authentication turned on is also required.

How do I add my driver’s license or ID to the Wallet app? 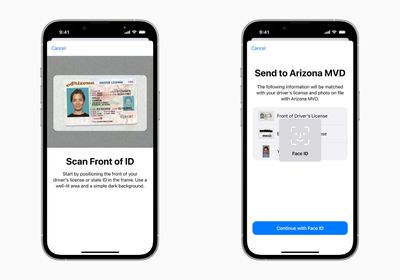 In participating states, you can simply tap the “+” button in the top-right corner of the Wallet app and follow the on-screen instructions to add their driver’s license or state ID to the iPhone and a paired Apple Watch. The process involves scanning the front and back of your driver’s license or ID card, confirming your identity by taking a photo of your face, and completing a series of facial and head movements.

You can add only one license or ID to one iPhone and one paired Apple Watch at a time.

How do I use an ID stored in the Wallet app?

To present an ID stored in the Wallet app at participating TSA checkpoints, simply tap your iPhone or Apple Watch on the identity reader. A prompt on the device will display the specific information being requested by the TSA, such as name and date of birth, and this information is only released after you authenticate with Face ID or Touch ID. A checkmark appears on the screen when you successfully present your license or ID.

You do not need to unlock, show, or hand over your device to a TSA officer to present your ID in the Wallet app, according to Apple.

Is the feature secure?

Apple says identity data is encrypted and that neither Apple nor the state issuing authority can see when and where you use your license or ID in the Wallet app. And if your device is locked when you present your ID, it stays locked afterwards.

Apple has a detailed privacy and security overview of the feature on its website with more details.